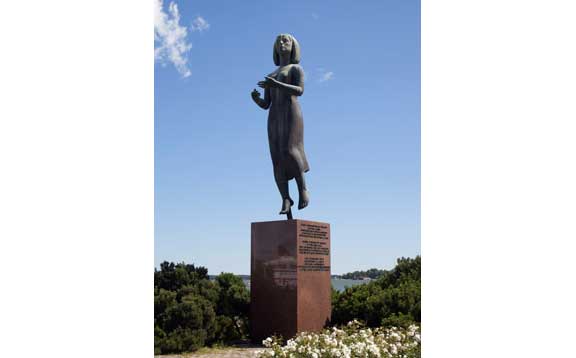 The text on the base of the rauhan (peace) patsas (statue) reads:

This statue of peace was erected by the people of Finland as a symbol of the peaceful coexistence and friendship of Finland and the Soviet Union; April 6, 1968

The sculptor, Essi Renvall, has said that the statue’s female figure is the spirit of peace returning after a war with a new, peaceful heart. The bronze work is 5,35 meters high and its red granite pedestal 3 meters high.

It was dedicated on the 20th anniversary of the Agreement of Friendship, Cooperation, and Mutual Assistance, also known as the YYA Treaty from the Finnish Ystävyys-, yhteistyö- ja avunantosopimus, the basis for Finno–Soviet relations from 1948 to 1992. Under the treaty, the Soviets sought to deter Western Powers from attacking the Soviet Union through Finnish territory, and the Finns sought to increase Finland’s political independence from the Soviet Union and its survival as a liberal democracy.