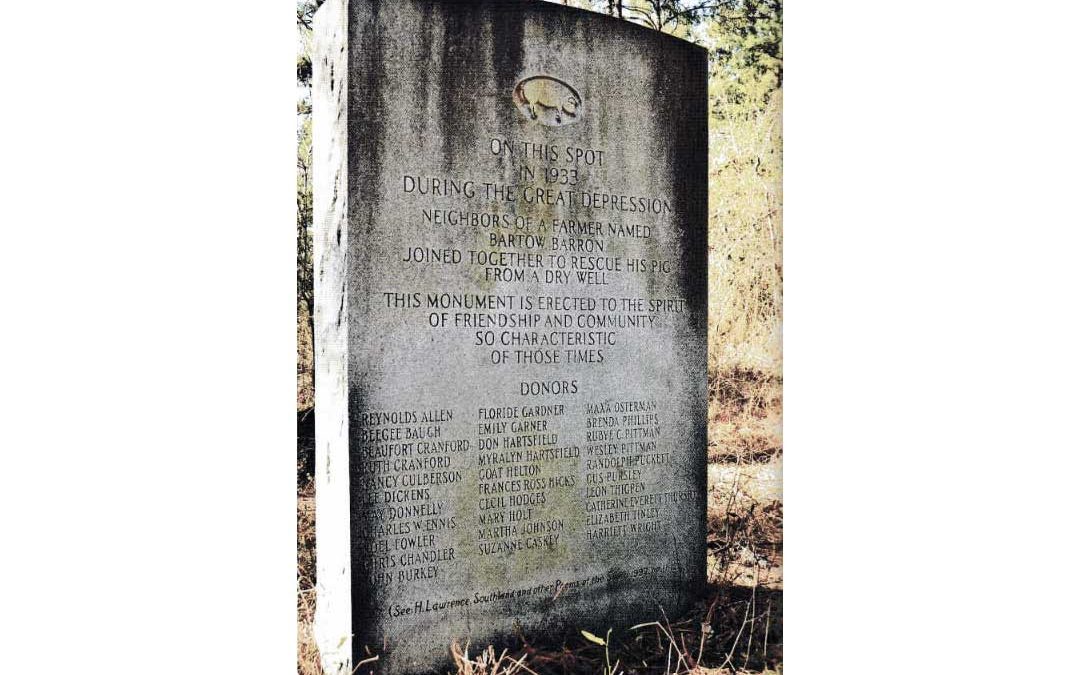 In 1933, in the depths of the depression, farmer Barlow Barton’s prize pig escaped. It was his winter pig, meant to feed the family. After two weeks of searching he found his pig, skinny, thirsty and desperate at the bottom of a dry well.

After lowering some water and turnip tips to nourish his pig, he devised a plan: he would shovel dirt into the well, slowly, and eventually the pig could climb out. He needed help, so he called upon his neighbors. People came from all around with their shovels and their mules pulling scrapers to help gather dirt and put it in the well. The pile slowly grew, and the pig scrambled upwards. Ten feet. Twenty. On the 12th day, the pig walked out of the well.

Suxty years later, Harold Lawrence a retired Methodist minister from nearby Midgeville, Georgia, was looking for Southern stories for a book. An elderly parishioner, who was a boy in Tennile when the pig was rescued, told him the story and took him down to Washington County to find the well. He wrote a poem about it, “The Depression Pig,” for the book. He liked the story so much that he encouraged the folks at 1st Methodist to take up a collection to erect a monument, and they did, in 1996. It includes a list of the people who pitched in to rescue the pig, plus these words:

On this spot in 1933 during the Great Depression neighbors of a farmer named Bartow Barron joined together to rescue his pig from a dry well. This monument is erected to the spirit of friendship and community so characteristic of those times.