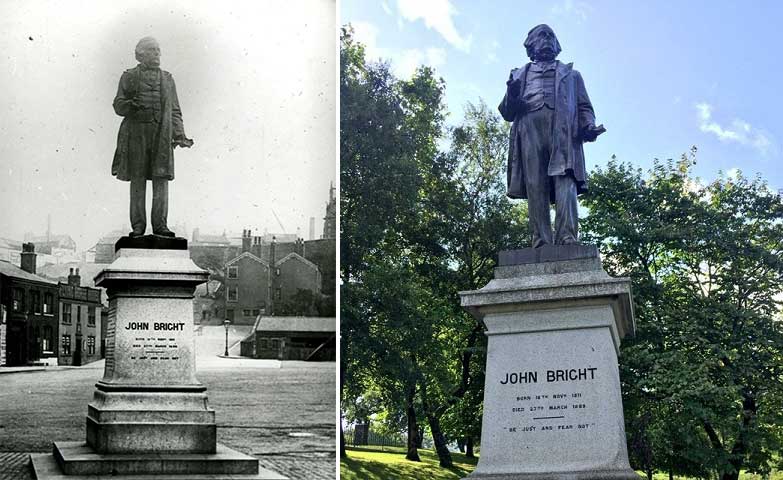 John Bright, the son of a cotton manufacturer, was born in Rochdale in 1811. He received a Quaker education that helped develop a passionate commitment to ideas of political and religious equality and human rights. Bright came to national fame as one of the leaders of the Anti-Corn Law League in the 1840s. He was a forceful and popular public speaker, and though he never held major political office he was one of the most influential politicians of the Victorian era.

Bright opposed slavery on moral grounds and was a supporter of Abraham Lincoln and the northern states in the American Civil War. Bright wrestled with the dilemma that the thriving Lancashire economy was one of the principal reasons why slavery was able to flourish in the USA and elsewhere. If Lancashire cotton mills, including his own family’s mills in Rochdale, did not rely on American cotton, then one of the pillars supporting the slavery economy would have been removed.  He argued strongly to develop alternative supplies of cotton, encouraging its cultivation by free labor in countries such as India.

Bright was a member of the Peace Society and denounced the Crimean War (1854-56) as un-Christian, contrary to the principles of international free trade, and harmful to British interests. “The Angel of Death,” he said, “has been abroad throughout the land; you may almost hear the beating of his wings.” He said that British foreign policy and the expensive network of diplomatic appointments constituted “a gigantic system of outdoor relief for the aristocracy.” In 1857 Bright failed to be re-elected as Manchester’s Member of Parliament because of his strong condemnation of the country’s participation in the Crimean War. He was burned in effigy.

All four sides of the base are quite densely inscribed. To the left as one faces the statue are three quotations:

My Conscious tells me I have laboured honestly only to destroy that which is evil and to build up that which is good. House of Commons, 23 April 1866

For twenty five years I have stood before audiences — great meetings of my countrymen — pleading only for justice.

My clients have not been generally the rich and the great but rather the poor and the lowly. They cannot give me place and dignity and wealth; but honourable service in their cause yields me that which is of higher and lasting value. Birmingham, 26 January, 1864

To the right as one faces the statue is a dedication:

This statue of Rochdale’s greatest townsman who devoted the labours of a life and the might of an unequalled eloquence to the advancement of justice, of freedom, and of peace Looking for no earthly reward is erected as a mark of love and veneration with which his memory is cherished by all classes of his countrymen. October 1891.

On the back of the pedestal is a summary of his official positions, both elected and appointed:

Pictured on the left in the topmost photo is John Bright’s statue in its original position in Rochdale’s Town Hall Square. It was moved to its present site in Broadfield Park in June of 1933 to make way for bus shelters. This move upset the local people; on February 7th 1935 the magazine ‘Come to the Fair’ published this verse to the tune of ‘Cock Robin’:

Who moved John Bright?
Said Councillor Dutton,
“We didn’t care a button,
The old chap’s dead as mutton
We moved John Bright!”
And the aldermen and councillors showed signs of agitation
When they saw John Bright’s new situation.

Who took John Bright?
Said Alderman Clark
“We did it after dark
And put him in the park
We took John Bright!”
And the people of the Borough were full of consternation
When they saw John Bright’s new elevation

Pictured on the right is the statue in its current position. Around 2007 there was interest in moving it back to the town center, but the cost, plus the danger of damaging the statue, killed that idea. The statue got a good cleaning in 2017.